Our Mother, Nina Black, was born Nina Stevens on May 18, 1913 in Mt. Carmel, Utah; and died of a stroke, peacefully  in the  home of her son Boyce on November 7, 2003 in White Salmon, Washington, seven years after her husband, Claude Elias Black (May 8, 2008- Thanksgiving Day 1996).   Nina took her last breaths holding hands with Boyce and myself  and surrounded by three generations of her descendants singing her favorite hymns to her as she passed through that veil between worlds. Claude had a quick heart attack after a Thanksgiving Dinner with the large family, and passed away on his own bed with his boots still on, just the way he would have liked.  His last breaths went through me as I did CPR and I knew beyond doubt that he was ready to go, I could feel him so strongly.

As a young girl growing up in southern Utah, Nina remembered her first schoolbus was a horse drawn Sleigh in the winter. A trip to Kanab, 20 some miles away, took half a day travel time down the old creek bed, watching out for quicksand areas. Her Mother, Mabel May Stevens, always had flowers on their piano, and many of her 10 brothers and sisters loved to sing and play music.  Their Father, Hyrum Wallace Stevens was a hard working man with a farm, and several cows.  Life was hard but full of love, fresh garden produce and plenty of milk!

and she met a handsome young man

Claude was her School Bus Driver for awhile, and the day after Nina Graduated from High School they headed off to St. George to be married in the LDS Temple, Sadly, the car broke down on the way and by the time Claude got it fixed and they made it to St. George the Temple was closed.  Claude had to be at Sheep camp the next day, so they found the Bishop and some witnesses and arranged a civil marriage.  After the summer working at the camp (Mom cooked, Dad was a Sheep herder), they returned to the Temple and got sealed for eternity.

The next 18 years found them moving around following work during the depression, having each child in a different town and in 4 states.  After living in Utah (Dad was a mechanic in Glendale, Utah), California (Orange Orchards), Arizona, and Idaho, (Mechanic and driver on road construction),  The Depression was hard times, often with so very little food for the family.  One time about all they had was a little flour, and they found a 50 pound bag of onions laying by the road.  They had baked onions, fried onions, onion soup, and were grateful.    Claude brought  the family to Washington in 1950 to help his brother Clell Black with a Service Station in Husum, and it became the home they had been searching for.  Raising their teenage kids here was wonderful.  Dad worked at Hunsaker’s and then at Ford Garage in Bingen, and I am told the house was always full of kids.  Mom said she had to count the sleeping bags on the lawn or the living room floor depending on the season to know how many kids she had that day to cook for.  To this day there are many who call Claude and Nina Mom and Dad, kids who stayed with us or came over for meals often, kids with troubled homes that my folks took under their wings.

I was fortunate to be born and raised in White Salmon, and went with Mom and Dad everywhere.

Mother was the teacher in life who most taught me to “Love one Another” by example, by actions. Love of beauty in nature was her legacy, seeing the Divine in others was her trademark. Humor was a joy shared with Mom and Dad… laughter and hugs filled our home. This amazing woman raised 6 children, and always had time for a hug and love… or cookies and homemade rootbeer,  or homemade icecream. 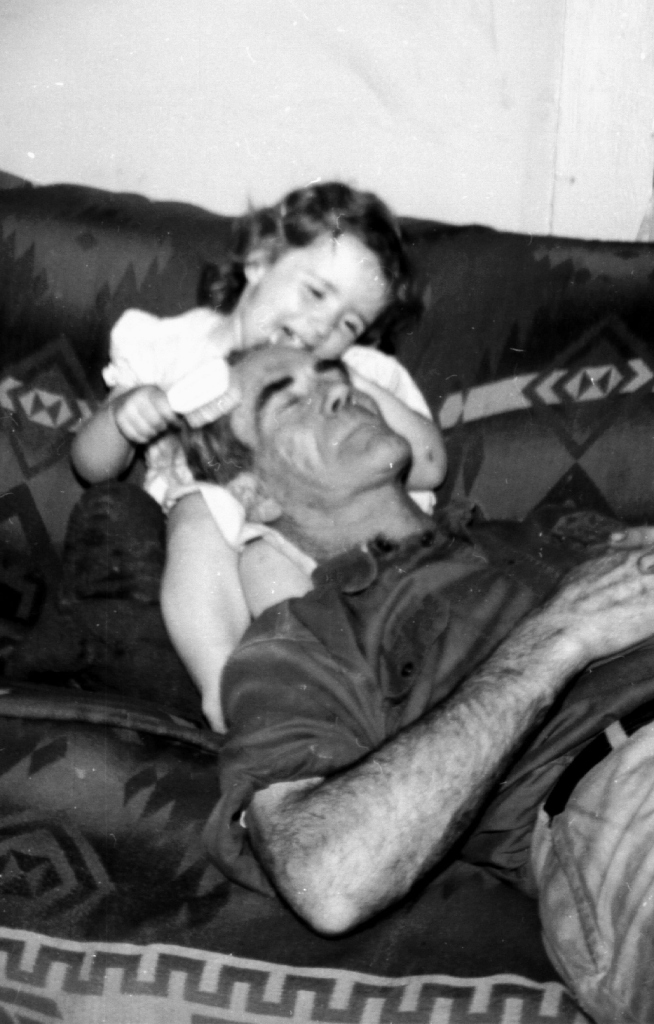 My wonderful brothers sadly left home for Navy, Army and College by the time I was 4 and my sister had already gotten married, so at times it was like being an only child, but when they were around they spoiled me rotten.

Claude and Nina lost their oldest son Sheldon in a hunting accident…and then had me 1 1/2 years later. My growing up memories were of a happy mother full of love and joy… willing to wade with me in the creek, throw a snowball at age 75, and kiss away all the pains. I have often wondered in recent years how she did it… and then I know.  It was because of her absolute faith in God and in what comes after death. She knew she would see her son again, he was not really gone… and so the pain was less sharp.  Her faith nourished her Husband, and all her Children; Nora, Sheldon, Dennis, Roger, Boyce, and myself.

I am always amazed at the strength of my parents… Not long before they lost Sheldon, Grandpa Alvin Black died of a heart attack in Husum where he had come to help his sons build a home for Clell and Allie.  In the spring after losing Sheldon,  Mom and Dad took their first EVER child free weekend trip to the coast, camping at Copalis Beach in Washington.  That is where I was conceived just when they thought they were nearly done raising children.  Mom was 45 and Dad was 50.  Then, while pregnant with me, Mom’s Mom passed away back in Utah and she made the journey for the funeral.  After all of this, still these amazing people said only kind things and raised me with joy and love. 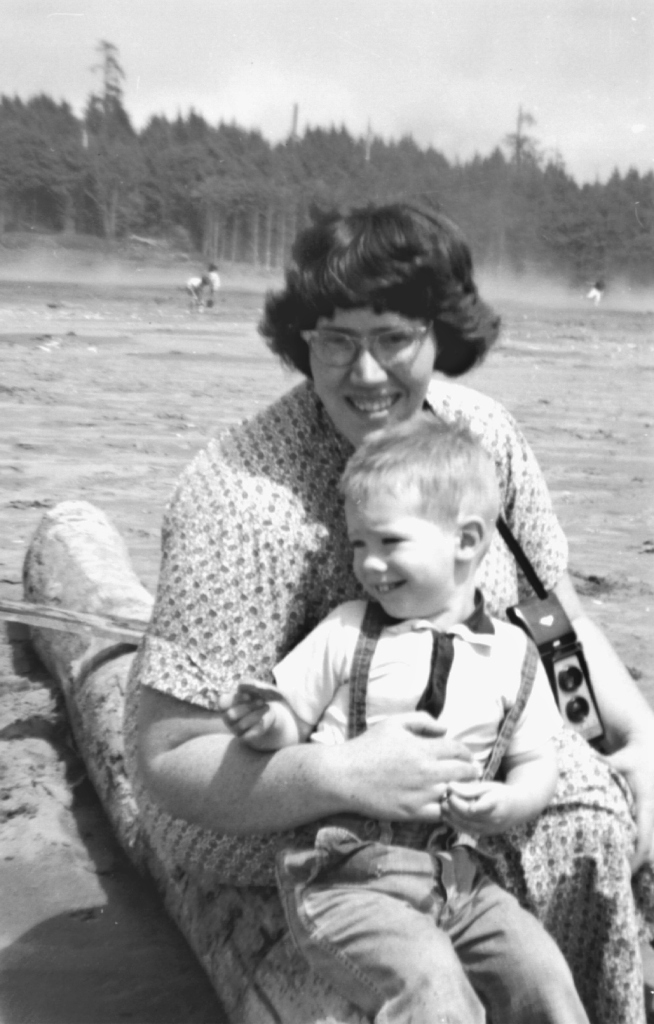 Nina loved this land.   Daily she would point out a lovely hat on Mount Hood or Mount Adams, or some lovely flowers blooming along the roads.  Summers were spent wading in the Lewis River, filling our pockets with rocks while Dad filled his bag with fish.  The smallest or largest moments of beauty around us were pointed out and appreciated.

Up until a week before her 90th birthday, Mom was still sewing patchwork quilts up on her old Singer Treadle sewing machine. Many of those quilts contained memories… as material salvaged from clothing was often used in her quilts.

Perfect Crystalline Frost on the early morning plants reminds me of my Mother, who taught me to always notice the moments of beauty in all seasons.  In the background on this photo, we see Mt. Adams, one of her favorites… and I see it now as her faith, enduring to the end.

Mother and Father, we love you!!!

My mother taught me to love the world around me… and if I can help others to see with new eyes by showing that beauty through photography. I have accomplished my hearts goal . Husum, WA is my childhood home and I consider home to be anywhere from Mount Adams to the Columbia River. I give thanks to my parents for their love for Nature and God. Starlisa.smugmug.com My work can be found online in full on Flickr, and while I am not set up to sell on that site, if you find a print of any size or style you wish to inquire about simply email me and I can send you a price list of prints by themselves or framed or mounted on foam core, gallery wraps, and standouts. I also license my photos for use in magazines, travel brochures and for web site use, and have been published several times. During the summer I am often at Saturday Market in Trout Lake or Hood River with my Note Cards and Prints You can also find me on Google as Darlisa Black, and on Facebook as Starlisa Black Photography www.flickr.com/photos/starlisa Starlisa.Black@gmail.com Thank you for Viewing… View more posts

6 thoughts on “Dedication Memorial In Honor of Loving Parents”